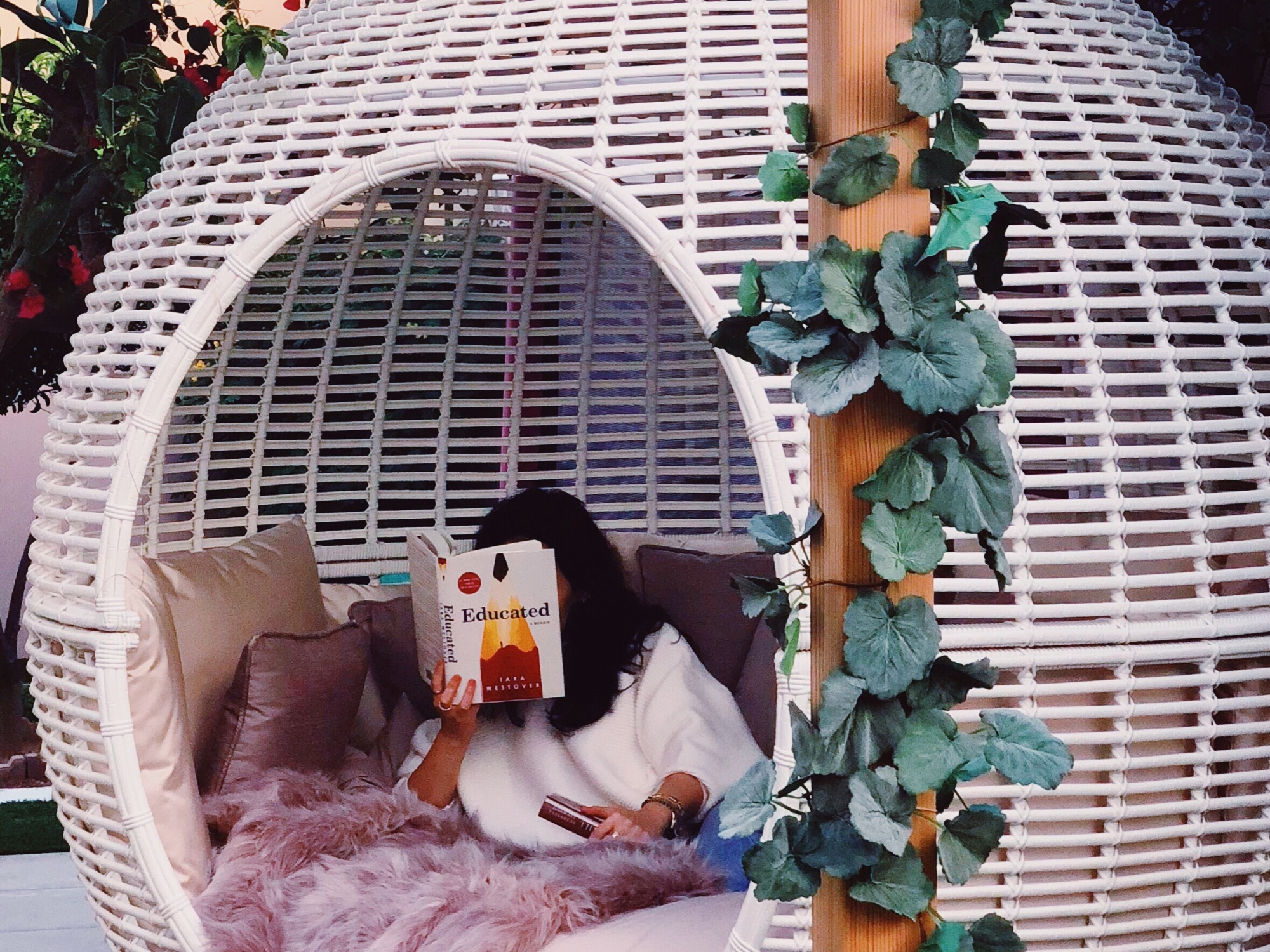 Educated (2018) by Tara Westover is a book is about a girl deprived of education until the age of 17. As a 7 year old she had normalised so much of what she was living with: no other friends, no birth certificate, no proof of existence. She gives a very searing look into the depths of her psyche, all her scars and issues. It took a lot of self awareness to write this book. Sometimes, though, I feel like she gives herself too much credit and some parts I find very hard to believe.

“My life was narrated for me by others. Their voices were forceful, emphatic, absolute. It had never ocurred to me that my voice might be as strong as theirs”.

Her writing is at times clunky and forced. It alternates between traces of pure, dry academia, to too flowery and imaginative but in a confusing way. It’s definitely because of her unique background (moving from only knowing biblical texts to the world of university) but her writing in and of itself is not excellent. For example, when she is better at standing on a rooftop than other students, she turns it into a whole philosophical spiel on fear instead of what is most likely a skill she has because she grew up on a mountain and is used to carrying herself on heights.

What made it so captivating was the actual story. Reading this book can be a very immersive experience. When you come to medical terms (i.e. raccoon eyes) I recommend googling for a visual. When reading the chapter ‘Hand of the Almighty’, I recommend playing the song Redemption by Bob Marley while reading.

I, for one, cannot fathom how they all survived that gaping mountain and clunky junkyard. How they survived wild horses, hungry metal and fiery explosions. How they survived TWO brutal car accidents as a family. HOW THEY SURVIVED BRAINS DRIPPING ONTO PAVEMENTS. All with barely any visits to the hospital and minimal medical care.

“When life itself seems lunatic, who knows where madness lies?”

Not until her mum started making her own money did they have a phone. It reminds me of how all my development studies courses at uni would prove that money in the hands of the mother/matriarch would lead to the betterment of the whole family whereas in the hands of fathers/men in gets spent at pubs or on self-serving items. This mother empowered her children with the steps of a phone and a birth cereritficate the moment she had a little bit of autonomy and fiscal independence – but this doesn’t last long. Tara’s grandmother, another female figure in her life, was the only adult trying to get her into school. Basically, improve and empower women and that gets channeled into the next generation.

Obviously, I gravitated towards the discussion of women and gender roles in this book. She grapples with what is allowed for the feminine body. Her family would say short sleeves and lipgloss were the attributes of a whore. She was limited in what she was allowed to achieve – her father said she belonged in a kitchen but then had no qualms throwing her off a tractor and putting her in charge of dangerous machinery when it suited him.

“I evolved a new understanding of the word “whore”, one that was less about actions and more about essence. It was not that I had done something wrong so much as that I existed  in the wrong way. There was something impure in the fact of my being”

The above quote reminds me of how some people in Qatar treat women (and KSA, Afghanistan and so much of the Muslim world) under the guise of religion. They even go so far as to say صوت المرة عورة – even the sound of a woman’s voice is impure. Smelling her, taking up the same space as her, is haram. A woman is relegated to confined spaces and treated with the simultaneous emotions of hatred and pure longing. They covet and, repulsed by their own base desires, punish the women. This is a trait of men, and not of religion, although they have cleverly institutionalized their power.

“Whatever you are, you are woman”

Tara suffers various forms of abuse at the hands of her family. Physical, emotional and psychological abuse. She gives us a powerful look into how hard it is. You love your family, they’re all you have. It’s easier said than done to say, they’re wrong for you, walk away and never look back. She kept looking back, she kept on loving them – even from the doors of Harvard she would still let them in. How do you leave your whole world behind? Even when the place you’re headed is “better” it’s still almost too much to give up. Victims always reframe their narratives to be able to stay, they take the blame and change the story. Tara was incredibly strong for breaking free, I’m not sure I would be able to do the same.

Tara’s mum (spoiler) ends up giving all her power back to her lunatic husband and son. Power ebbs and flows.

I love how she treats the concept of memory – how it twists and turns and changes with the present – and then introduces the concept of history as institutionalized memory (not in those exact words).. We can really unpack her whole trope of memory as a complete philosophical/sociological discussion.

Another important discussion is trying to fathom how it would live without any history. Zero history. It shows just how much world history informs our present actions. When you’re isolated from it it would be hard to fit into certain views or perspective. I never thought so deeply – but why do people treat jews the way they do? Because of the Holocaust. Why does the entire black lives matter movement exist? Because of slavery. Etc. Not being familiar with your past means not knowing how to act in the present. Same with memory and personal histories. All the world’s stories feed into each other and to be isolated is to be disoriented.

I’ll leave you with Ellen’s interview and this poem which I believe EVERYONE should keep in mind while reading. I got the poem from this article/review which I also enjoyed reading.

It refers to the narcissist’s tendency to gaslight and shift blame, and I think it describes what Tara’s parents did to her:

The Hymn of the Narcissist